Come to Priority Urgent Care for your asthma and COPD treatment! Asthma and COPD are common lung diseases that can make it hard to breathe and can cause discomfort. Our doctors can help, please call us today for more information. We have convenient locations to serve you in Ellington CT, Unionville CT, East Haven CT, and Cromwell CT!

Breathing is the most fundamental function that keeps the human body alive and well. There are many complications that lead to difficulty breathing, such as asthma, which is a common disease affecting millions of people around the world. Another complication is COPD, or chronic obstructive pulmonary disease. If you are having difficulty breathing and you are not sure what could be causing the issue, read this article to better understand the symptoms, then get in touch with a specialist.

What are the current treatments for asthma?


The key to stopping asthma attacks before they start is prevention and long-term control. Treatment generally involves learning how to recognize your triggers and taking preventative steps to avoid triggers and to keep symptoms under control. In the case of an asthma flare-up, you may need the use of a quick-relief inhaler.

The main treatment for severe asthma is taking medications that help prevent asthma symptoms. These include:


Can asthma be cured completely?


Asthma is an very controllable illness. For most sufferers, control is so effective that it virtually amounts to a cure. However, asthma is not curable in the sense that it never entirely goes away. It has become more and more clear that there many types of asthma which differ greatly in their presentation and onset. Successful control of asthma entails controlling the inflammation in the airways and reversing the symptoms before they get out of hand.

What is the best treatment for COPD?


COPD, or chronic obstructive pulmonary disease, is a lung disease characterized by chronic obstruction of lung airflow that interferes with normal breathing and is not fully reversible. The more common terms like ‘chronic bronchitis’ and ’emphysema’ are no longer used, but are now included within the COPD diagnosis. COPD is not a “smoker’s cough” but an under-diagnosed, life-threatening lung disease.


To control symptoms, long-acting bronchodilators are used for daily maintenance therapy. These medications relieve symptoms by relaxing muscles in the airways and removing mucus from the lungs.

Indacaterol is taken once daily. It works by stimulating an enzyme that helps muscle cells in your lungs relax. It starts working rapidly, and its effects can last a long time.

If you experience shortness of breath or wheezing with other long-acting bronchodilators, this drug is an option. Possible side effects include coughing, runny nose, headache, nausea, and nervousness.

If you have both asthma and COPD, your doctor may recommend a long-acting bronchodilator.


Sometimes called rescue inhalers, short-acting bronchodilators aren’t necessarily used every day. These inhalers are used when necessary and provide fast relief when you have breathing difficulties.

Included in these types of bronchodilators are albuterol (Ventolin HFA), metaproterenol (Alupent), and levalbuterol (Xopenex).


Another type of bronchodilator for the treatment of COPD is an anticholinergic inhaler. It also helps prevent muscle tightening around the airways.

It’s available as a inhaler, and in liquid form for nebulizers. These inhalers can either be short-acting or long-acting. If you have both COPD and asthma, your doctor may recommend an anticholinergic.


Steroids can also help in the reduction of airway inflammation. Because of this, some people with COPD use a bronchodilator inhaler along with a steroid inhaler. But keeping up with two inhalers can be an inconvenience.

A few of the newer inhalers combine the medication of both a bronchodilator and a steroid. These are called combination inhalers.

If you or someone you love is experiencing difficulty breathing and suspect is could be asthma or COPD, please contact our office to get in touch with a specialist today. We serve patients from Ellington CT, Unionville CT, East Haven CT, Cromwell CT, East Windsor CT, Somers CT, Burlington CT, Canton CT, Branford CT, New Haven CT, Middletown CT, and Rocky Hill CT.

Additional Services You May Need 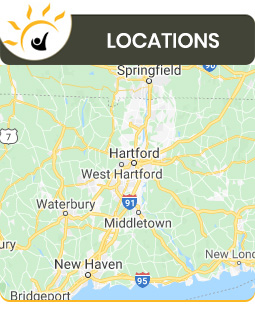 *In case of a life threatening emergency, immediately call 911.
**For any medical procedures, patients may respond to treatment differently, hence each patient’s results may vary.
***Information on this site is not intended or implied to be a substitute for professional medical advice, diagnosis or treatment. All content contained on or available through this site is for general information purposes only.
****By using this website and sending us your information, you are giving us permission to contact you by electronic and non-electronic means. We also track the conversions and collect user data to improve marketing.
*****If you are vision-impaired or have some other impairment covered by the Americans with Disabilities Act or a similar law, and you wish to discuss potential accommodations related to using this website, please contact us.

How May I Help You?